SUMMARY: The only relevant policy question about climate change is the effect of CO2. Our party has confirmed that CO2 has no observable effect on the climate.

The Earth started warming from around 1800 after the end of the Little Ice Age.  The rather poorly correlated relationship between warming since 1800 and man-made CO2 emissions since 1950 is purely coincidental, not causal. Geological data also confirm that CO2 never caused climate change in the past - so it is impossible for it to cause such change today.

It is not necessary to have a proven alternative theory of the climate, for that is an ongoing matter for science to explore. Our party rejects attempts by UN organisations to impose the socialist model on the world in the guise of “climate change”. We remain committed to appropriate action against real pollutants and real environmental issues.

European Climate Declaration September 26, 2019, to which our leader Sanjeev Sabhlok is India's only signatory (details).

RECENT ARTICLES BY SANJEEV SABHLOK IN HIS TIMES OF INDIA BLOG

Why should we subsidise tomorrow’s rich in the name of the climate? - 28 July 2019

Solar energy badly harms the environment. It must be taxed, not subsidised - 2 September 2019

Pandemic, climate change: Why is the sky always falling on our head? - 6 August 2020 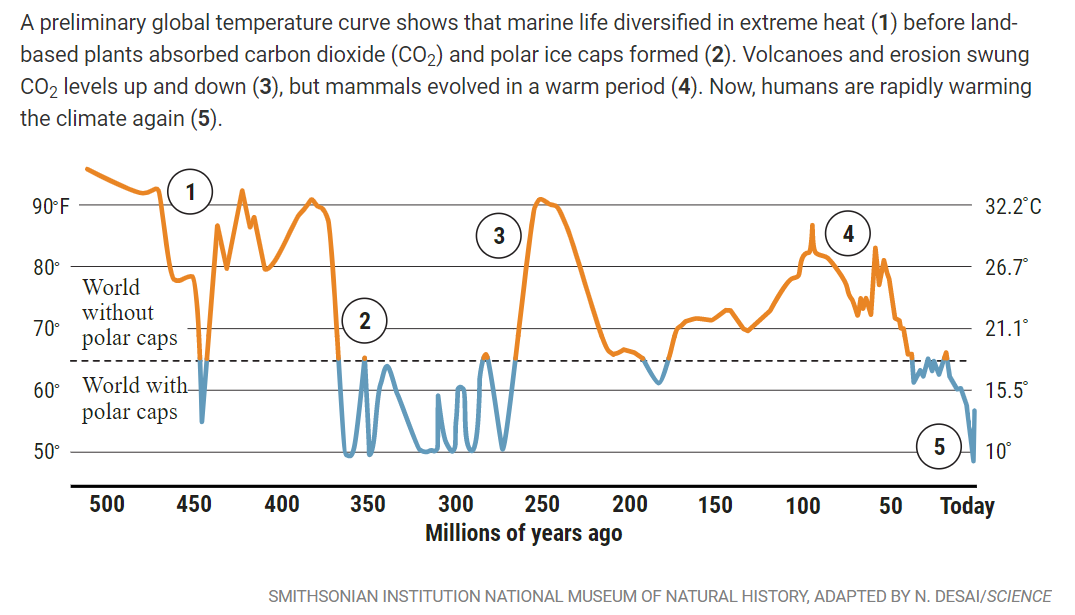 Note on this chart above: Although this is published in the prestigious Science (2019) magazine  (screenshot in case they remove it), the ideological position of Science has contaminated its commentary. The claim that "humans have been rapidly warming the climate "again" is ideological nonsense. Half of half a degree max (even going by IPCC) doesn't even show up as a blip in this chart.

And see important charts at: If you deny these climate science charts, YOU are the CLIMATE DENIER

Note: List of places where CO2 is measured: Mauna Loa is the longest series we have but there are many other stations.

Comments on climate change from one of the greatest economists of all time, Vernon Smith

Increasing CO2 and its Impact on Agricultural Production - by Centre for Environment and Agriculture, Mumbai (PDF)

Whom to read: Nature journal has prepared a list of 386 rational thinkers. You can start with any of them. ANY of them is far better than the climate deniers (who call themselves "believers") - people who deny the entire sciences of biology, geology and atmospheric science. Also these scientists smeared by Carbon Brief.

The one rule that would expose wind power’s true cost - Terry Mccrann, 17 August 2019

Why Renewables Can’t Save the Planet - Michael Shellenberger, 27 February 2019

VIDEOS THAT HIGHLIGHT KEY ASPECTS OF THE SCIENCE

In the video below, Prof. Tim Ball shows not only why the "science" behind the CO2 scare is completely false, he shows how the fascists and eugenicists have created this scare very consciously in order to choke modern civilisation and development.

In the video beow we see the terrible science behind the climate panic. Climate models ASSUME that CO2 causes warming and therefore dramatically over-shoot in their predictions.

In the video below, renowned scholar Steven F. Hayward SMASHES the climate alarm

In the video below Professor William Happer, Donald Trump's adviser, smashes the myth that CO2 is a problem

In the video below, Prof Ross McKitrick explains why Michael Mann's hockey stick graph is the result of terrible statistical analysis. This is explained in detail in the book The Hockey Stick Illusion by A.W. Montford

In the video below, Steve McIntyre explains how Michael Mann cooked up his hockey stick model.

Donna Lafromboise summarises how the IPCC has nothing to do with science: entirely ideology and politics

More videos at this playlist.