The first thing that comes into people’s mind when they hear the word capitalism is greed. People associate capitalism with power and greed. They believe capitalism is an economic system which benefits only the rich, and that without socialism we would be slaves of the capitalists. A mixed economy, some of them believe, will give the best of both worlds. This is hardly the truth. Capitalism is an economic system in which the means of production are privately owned. It is a system based on the voluntary exchange of goods and services. Socialism is the exact opposite of that. Now, let me ask you a question: Which of the two systems will produce better outcomes? Capitalism or Socialism? If your answer is socialism, then this article is for you.

Socialism has done nothing to improve our lives. In fact, wherever this system is tried, it results in poverty. Countries like Venezuela, Cuba tried it, and they failed. Food, Clothing and Shelter, the basic necessities of life, are a luxury in these countries. Compare that with America, a country built by Capitalism where even the poor have refrigerators, televisions, etc. The number of people living in absolute poverty has declined from 94% of the world’s population to 9.6% of the world’s population. This is because of capitalism. 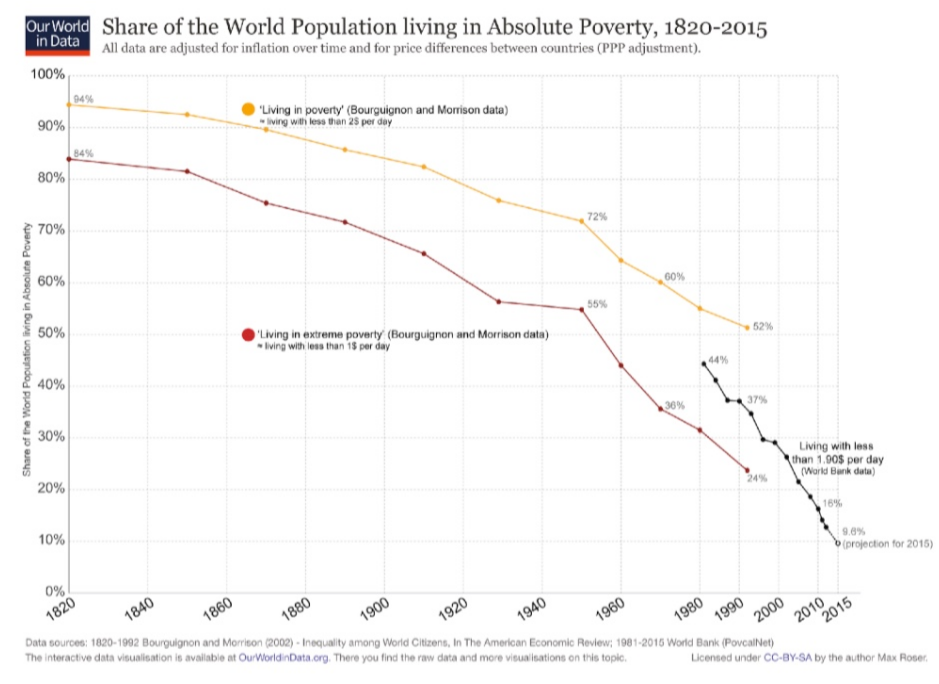 As you can see, rapid reduction in poverty started during the 1800s. This period also coincides with economic liberalization of many countries. It has been observed that the freer the market is, the more developed the country is. This shouldn’t come as a surprise. The individual always knows what’s good for him than some government bureaucrat. Unfortunately, our politicians think that they know what’s good and what’s bad for us and that giving them power is the only way we can be better off.
The reason why India is still a poor country can be traced back to our post-independence period. Our leaders thought (and still think) that the country can be made rich only through the government. They believed that government involvement in the business of providing food, clothing, shelter and other goods and services can produce better outcomes than a free market. They were wrong.

One of the problems a socialist economy faces is the economic calculation problem. In a free market, prices reflect the information necessary for the market to function.
Information such as supply and demand of resources, labor, and products is conveyed by the market to the people through prices. This helps the producers to decide whether they should produce more of a commodity, whether it is demanded by the consumers, or whether they should engage in the production of the commodity or not. This results in an efficient allocation of resources. A socialist economy, on the other hand, would cause an inefficient allocation of resources because of the absence of prices or the presence of price controls. This is one of the many reasons why socialism fails.

The only way to make India rich is not through a “top-down” bureaucracy. What we need is a “bottom-up” approach. We need a limited government. We need to get rid of wasteful and inefficient government bureaucracy. The role of the government should be to protect its people from aggression, theft, breach of contract and enforcing property laws. It should stay out of people’s and businesses’ affairs. Limited government is one of the reasons why countries like Hong Kong, Singapore, South Korea have experienced massive economic growth. I hope to see India following the same path.