Today, two major Hindi media outlets in Bhadohi district conflated our party’s name with some organisations that are the polar opposite of our party's ideology. We have requested these outlets to issue a correction but are also issuing this general clarification.

We, Swarna Bharat Party, are India’s only liberal party, a party that stands for liberty in all its forms. We are liberal in the classical sense – not in the modern socialist sense in which the word “liberal” is sometimes used these days. The word “Swarna” in our party’s name stands for golden, i.e. swarnim. This represents a wealthy and prosperous India, the fabled golden bird, Sone Ki Chidiya, which India can become after our party's policies are fully adopted. This fabled bird is our party’s logo.

We are entirely different to these illiberal organisations. We represent all Indians, regardless of caste or religion. Our party was registered with the Election Commission in 2014 and is now engaged in spreading the message of liberty, justice and security across the country. Our message of individual sovereignty and equality under the law is radically different to the hierarchical and obsurantist ideas of these other organisations.

We invite the media to read these articles in the Times of India - at http://bit.ly/2ENDVlr and publications on our party’s website - at http://swarnabharat.in/publications to better understand how radically different we are to these other organisations that have a somewhat similar name to our party’s. We request, therefore, that care be taken henceforth to put our proper and correct name out in the public.

For any questions or interviews, please write to info@swarnabharat.in.

SBP is India’s only liberal party, committed to defending liberty and promoting prosperity. 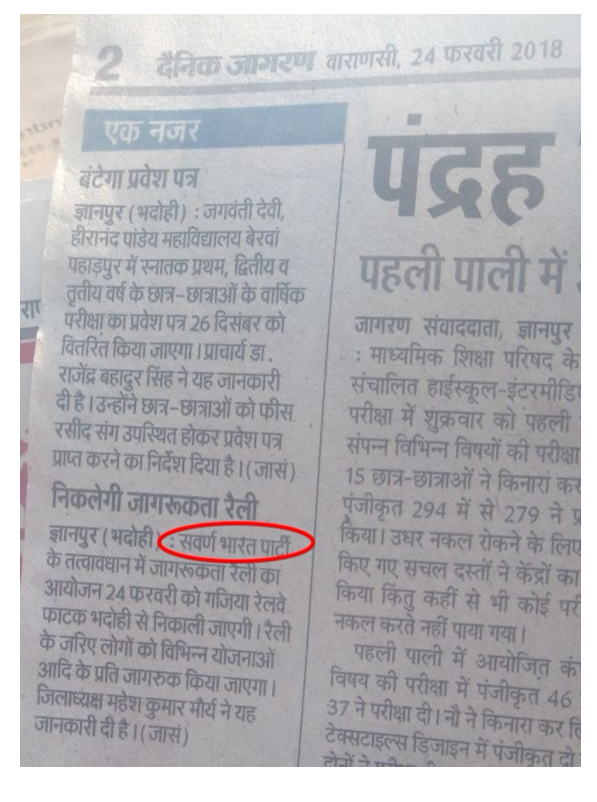