Mr Sanjay Sonawani, President of Swarna Bharat Party demanded that the encroachment of public grazing lands across the country by corrupt forces in league with local politicians  be immediately brought to an end. This encroachment has grievously harmed farmers and the environment.

Livestock rearing contributes around 4% of India’s GDP and sustains over 10 crore people (8.8% of India’s population). A good proportion of these people are landless nomadic pastoralists or marginal farmers who depend on pasture lands for survival. Pasture lands have reduced by around 70% since independence. Nomadic shepherds now trudge three to four hundred miles to feed their herds. Many of them are forced into unemployment each year.

These lands play another critical role. In states where cow slaughter is forbidden, farmers unable to buy fodder for old cows, let them out in the pastures. Where pastures have been encroached, such old cows are discarded in the towns, where they eat plastic. The number of such cows has dramatically multiplied.

In its 28 January 2011 judgement in the case of Jagpal Singh vs. Panjab Government, the Supreme Court of India directed that all encroachments be demolished. Unfortunately, most encroachments still remain. And while many States have amended grazing land laws to stop further allocation of such land they continue to allow Gram Panchayats to allot such lands where no other land is available for an intended (non-grazing) purpose. Grazing land is still being taken away by corrupt forces. This is entirely unacceptable.

There are also grim consequences of this disappearance of grazing lands on the environment and eco-system. Many species of plants and wildlife are being endangered. Further, forest departments often plant incompatible species on these lands, further damaging the eco-system. And forest laws impose draconian restrictions on traditional livestock farmers. They prevent sheep from grazing in forests on such lands, even where the sheep cannot damage big trees.

Mr Sonawani said the country needs the right balance between development, protection of pastures and protection of the environment. We urgently need a law on the lines of the Taylor Grazing Act of USA. Under such a law, permits would be issued (at cost) for grazing and for making improvements to grazing land by pastoralists, such as temporary fencing. Such permits can be revoked under severe drought or other natural disaster conditions. Further, a separate authority would manage all such lands and demolish all encroachments. There is also an urgent need to promote high output grass species. The livestock industry has vast potential, given huge demand for cattle and cattle products from China.

Mr Sonawani demanded that the Modi government immediately draw up a clear policy on this issue, failing which Swarna Bharat Party will consider launching a movement to regain control of the nation’s common public lands.

Notes for Editors
SBP is India’s only liberal party, committed to defending liberty and promoting prosperity.

A press conference was held in Pune on this matter. Some press reports, below: 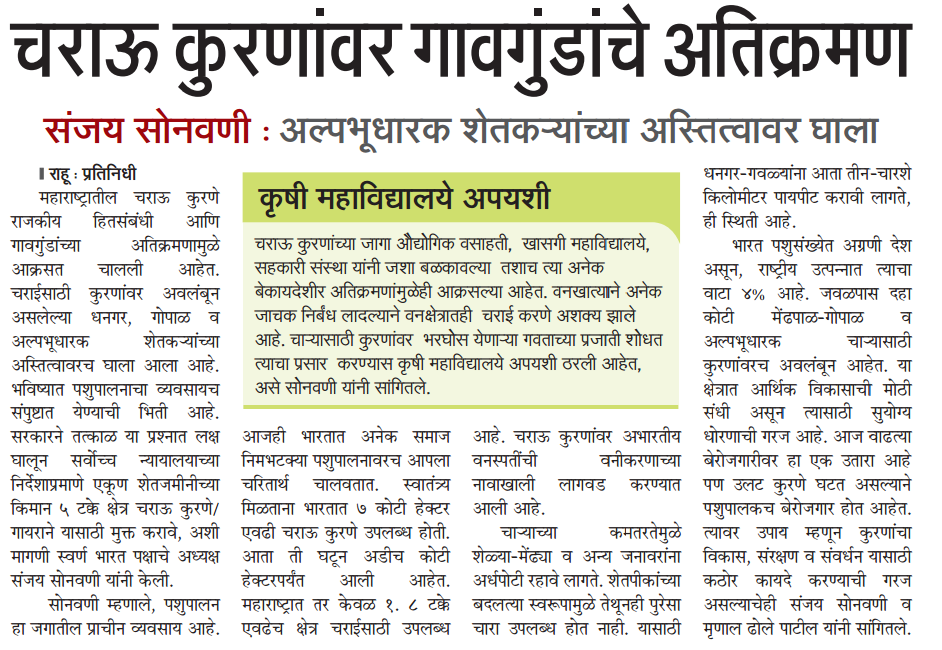